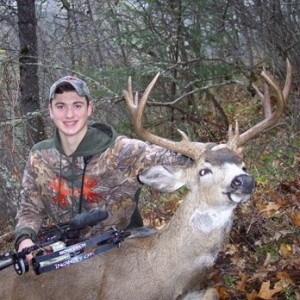 Hunter Jay Williams is a professional archer and accomplished bow hunter. He is eighteen years old living in Southern Oregon and is attending Southern Oregon University as a Business Management major. Hunter has been on BowTechs Pro Staff for the past three years and is grateful to share his passion and knowledge about archery in both tournament and hunting disciplines. As a competitive tournament archer, Hunter has competed in regional, state, and national tournaments throughout the Western United States. Hunter has earned numerous state championship titles in both 3D and Triple Crown. Hunter is an advocate in promoting awareness to Childrens Leukemia in memory of his good friend by symbolizing the orange ribbon on his Pro Staff shooter shirt while competing. Hunter is also an accomplished and diehard bow hunter. He holds a number of public land record book entries published in the Record Book for Oregons Big Game Animals. Hunter has also been published in Eastmans Bowhunting Journal for his public land bow hunting successes. Hunters favorite animals to pursue are elk, deer, bear, wild boar, and turkey or any other North American big game species for that matter. Hunter gives all his glory to God and feels very blessed to represent BowTech. You can reach Hunter at his social media sites: Instagram: hunter.williams.9216 or Facebook: Hunter Williams